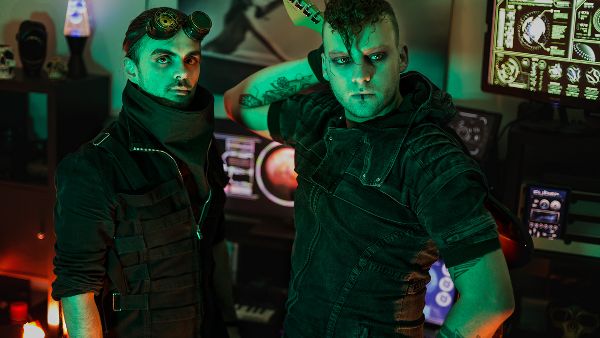 UK alt-rockers SHAPE OF WATER attempt to terraform Mars with epic struggle of man vs. machine in “Mars-X” music video

Get the re-invented “Mars-X Cinematic Version” from the new EP entitled Lockdown On Mars available everywhere now! Stream/Download at this location.

British alternative electro-rock band Shape Of Water have revealed an amazing new music video for their song “Mars-X”. Watch it now via YouTube at this location. “Mars-X” is taken from the band’s debut full-length album Great Illusions which was released in June of 2020. The album was produced by Paul Reeve (Muse, Beta Band, Supergrass) at Airfield Studios.

“We always wanted to tell a sci-fi story for this video but because of Covid, it was logistically impossible during the second UK lockdown” says vocalist Rox Capriotti. “We came up with this astronaut story based on the song’s lyrics, and since we couldn’t actually film it, Luca had to draw everything and then animate it.” Guitarist Luca De Falco adds, “It took me around 3 weeks to finish and it was a lot of work, but that’s what I love to do. The song was one of the last we wrote before recording Great Illusions, but ironically it became one of our favorites!”

In addition, the band just released an exciting cinematic rebirth of electro art-rock entitled Lockdown On Mars. Through the lockdowns and isolation of the Covid-19 Pandemic, Shape Of Water “reinvented” some of their fan’s favorite songs. Reimagined, re-recorded cinematic versions of “Mars-X” and “The World Is Calling Me”. These instant classics, along with an electro-acoustic version of “Perfect Love” and a daring remake of Still Karma entitled “The Great Still Karma” breathe new life into these fan favorites. Top it all off with a cover of “Hurt” by Nine Inch Nails, and this EP sets a new bar for the alternative electro-rock scene. Stream or Download Lockdown On Mars at this location.

Stream or Download the EP on iTunes or Amazon, and stream it on Spotify, Apple Music, Pandora, Amazon Music, and Deezer and more here.