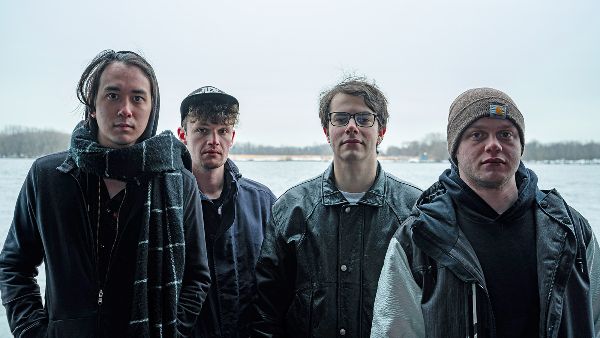 The band’s sixth full-length album South Of The Sun is scheduled for release on October 15, 2021.
Pre-order / Pre-save at this location

Psychedelic sludge-rockers The Stone Eye have revealed a new music video for their latest single “Catatonia”. The video was directed by Stephen Burdick. Watch it right now at this location. “Catatonia” is the second single from the band’s sixth full-length album South Of The Sun which is scheduled for a worldwide release on October 15, 2021 via Eclipse Records.

“Catatonia was our attempt at writing a simple, circular tune with a strong hook that would stick in listener’s minds, like the way Smells Like Teen Spirit by Nirvana does,” says lead vocalist & guitarist Stephen Burdick. ” The idea behind the video wasn’t anything too elaborate, just us trying to be as absurd and ridiculous as possible whilst also making some sense. Why not have a rogue, alcoholic police officer with a handlebar mustache try to dish out a parking meter ticket, then proceed to have the pursuit of his life which ends with him standing face to face with a risqué representation of the devil who proceeds to smack his bum? We’ve never seen that done before, and what’s more ridiculous than that?”

The new record, titled South of the Sun, is one of those gems that is familiar somehow, yet takes the listener on a journey mapped out in new pathways. The album’s music invokes the spirits of Frank Zappa and Kurt Cobain while applying their influence upon music which easily falls alongside the likes of Queens of the Stone Age and Alice In Chains. Heavy with a layer of glorious weirdness, this album combines a raucous, dirty guitar sound with clever musicianship … vocals that are as hypnotic in harmony as they are diverse in range, and a rhythm section as daring as it is ornate and, at times, funk-a-licious. With thirteen mesmerizing songs altogether, the singles from the album certainly showcase the wide range of influences upon the band’s writing. For the first single “Witches & Raptures”, the band sings about being trapped in the big picture of the world around us and how servants eventually are consumed by their social masters after they have served their purpose. The second single “Catatonia” is more of an exercise in meditative songwriting designed to just lose the listener in the lyrics which represent such philosophical questions such as ‘who’s out there, what’s there?’.  The third single “Aleutian Summer” can be best described as a scene out of The Shining, going stir-crazy because you’re figuratively trapped in the middle of God knows where. They are soulful songs, and in their own way erotic, both perfect for rock, alternative, stoner, and even metal radio playlists as fuzzy stoner sludge wrapped up in a progressive, pop metal take on the rock genre.

MICHAEL SCHENKER (MSG): a half century of immortality!

SHAPE OF WATER: commune with ghosts in new “A Ghost In Manchester” music video & single