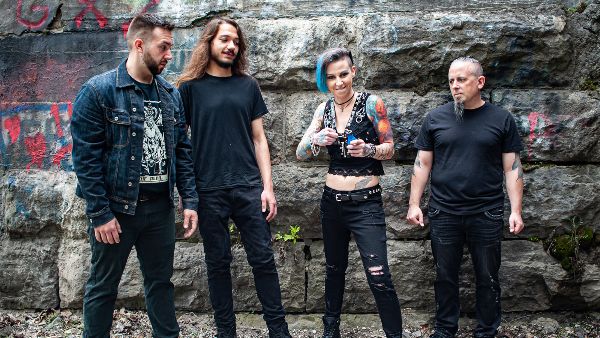 On tour w/ SMILE EMPTY SOUL in August, see dates below and get tickets here

Hot off the heels of having just released their debut album Turning to Ashes in January of this year, American NWOCR band Hearts & Hand Grenades are back! The band have just revealed a music video for their brand new single “Bad Medicine” which is the first single from their upcoming sophomore album Between the Lines. The video was directed by Nick Sonricker at Twenty6 Productions. Watch it right now at this location.

“Bad Medicine is about being told that there’s a quick fix for all of our problems in life, which is clearly a lie,” says guitarist Mike Bress. “The miracle cure is often nothing more than someone’s opinion and that makes it some bad medicine indeed!” Lead vocalist and bassist Stephanie Wlosinski adds “while shooting the video, Kenny kept losing one of the dials on his guitar and Mike managed to lose about fourteen picks even though we never left the garage. These are prime examples of what the song is about… sometimes things just go wrong!”

Between the Lines contains ten hard-rocking earworms full of savage riffs and powerfully deep lyrics. The album was produced by Justin Rose (Goo Goo Dolls, James Taylor, Spyro Gyra) at GCR Audio, and the cover art was designed by Jeff Ballance at 119 Design. Between the Lines will be released worldwide via Eclipse Records on November 19, 2021. Standout tracks include the album’s high-energy first single “Bad Medicine” which represents the disappointment experienced when something doesn’t go as planned. “Beautiful Pain” is about the kind of pain you can learn and grow from, while owning your actions that may have brought you to that point. The title track “Between the Lines” is about the lies we are told by the media and how it negatively affects society and of particular note, “Moonlight” is the band’s modern rock version of Moonlight Sonata by one of history’s greatest composers, Ludwig Van Beethoven. This album is pure, controlled emotion… rock like you’ve never quite experienced it before, and the kind that only Hearts & Hand Grenades can deliver. Get ready to scream it out for the world to hear… Hearts & Hand Grenades are back and their latest album rocks!