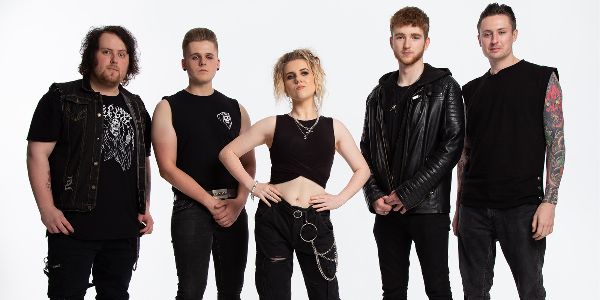 Newcastle, United Kingdom – NWOCR / alternative-metal rockers Tomorrow Is Lost have revealed yet another new music video, this time for their song “Black and Blue“. The video was directed by Andy Pilkington at Very Metal Art. Watch it right now: https://www.youtube.com/watch?v=PdrTI4bpq8o

“Black and Blue became an unexpected fan favourite from its earliest live outings” says guitarist Ryan O’Hara. “It is one of the most lyrically frank examples from the album, delving into some truly raw and personal experiences that I’m sure more women and men can identify with than you’d like to think. Put plainly, Black and Blue is a song about control, coercion and violence, a toxic kind of love which became the central focus for the structure of the album, and is a song that provides ‘Therapy’ with a defining and cathartic moment both musically, conceptually and personally’.

“Black and Blue” is the fourth music video from the band’s recent full-length album Therapy which dropped worldwide on March 13, 2020 via Eclipse Records. The album has received dozens of overwhelmingly positive reviews from British and US rock press, and the album recently surpassed 250k streams on Spotify. Here’s just a sample of what critics have been saying about the album:

Therapy is a dynamic, anthem-ridden collection of eleven brilliant songs recorded by the Newcastle rock band who have quickly cemented themselves as the forerunners of the NWOCR (new wave of classic rock) movement which is has been exploding throughout 2020. The album was produced by Dave Boothroyd (Phil Campbell [Motorhead], Don Broco, The Bastard Sons) at 6db Studios, and was mastered by Jon Astley (Judas Priest, The Who, The Rolling Stones) at Close To The Edge. The album’s artwork was designed by Andy Pilkington of Very Metal Art.

The band previously revealed their first three music video from the album, for the singles “Wildchild“, “Hideaway“, and “White Noise” so be sure to watch them all right now!