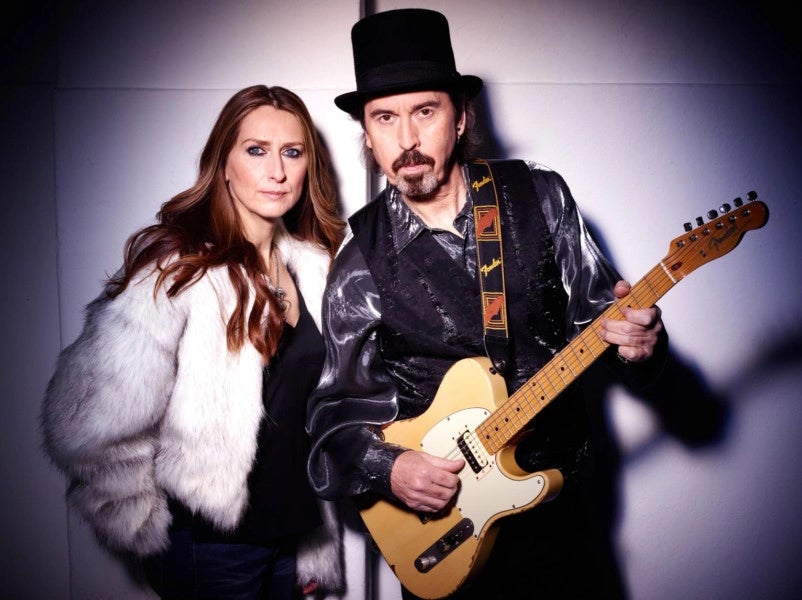 Today, March 26th, Singer-songwriter Ali Maas and former Whitesnake guitarist and songwriter Micky Moody announce the vinyl release of their recent critically acclaimed album ‘Who’s Directing Your Movie?‘,via Last Man Music. Cut half speed for a better sound quality, the turquoise 180gr vinyl, mastered by Grammy-nominated mastering engineer Mazen Murad. Available via MUSIC GLUE
Known between them for their work in bands such as Whitesnake, Juicy Lucy, and McQueen, ‘Who’s Directing Your Movie?‘ is the follow up to the husband and wife duo’s acclaimed debut ‘Black And Chrome‘, released in 2016. The pair set out with a defined mission statement to encapsulate the personal and wider feelings they wanted to share on the record, which as written by Classic Rock in their album review, it reflects ‘the diversity of the couple’s career experiences‘. The duo has been supported by everyone who counts in the rock/blues arena, from the already mentioned Classic Rock to TotalRock, BlabberMouth and Record Collector, with spins at radio including BBC’s The Big Country Show and Radio Caroline.

Written and recorded throughout 2018 and 2019, the new body of work is a journey through genre and style – touching upon everything from Bluegrass, Folk, Americana, and Classic Rock – the stylistic shifts in the album are inspired by Robert Plant’s ability of reinvention, tied together by the duo’s core inspirations of the classic storytelling of songwriters including Bob Dylan and Richard Thompson. Crafting a unique voice among the genre, in their own words Ali Maas & Micky Moodywanted to create ‘a record which could be a commentary on our own personal journey and also ask a few questions about what is going on in the world. It is a nod to both of our pasts, but also looks forward to a new path’.
Opening track and lead single ‘These Times’ is a defiant and ever more so pointed protest song that is as scathing as it is a rally to the heart, whilst lighter moments of hope also peek through in songs such as the meditative ‘A Sunset and a Dram‘. The duo’s erudite ability to weave sometimes heavy lyrical messages to captivating accompaniment and swampy rhythms is evident in the Gothic slides on ‘All The Bastards In The World’  and the Bo Diddley influenced ‘Where Does It Leave Me?‘, written with Alan Glen (Nine Below Zero, Yardbirds).

Yet amongst the defiance and the scathing critiques of the worlds ills, ultimately ‘Who’s Directing Your Movie?‘ concludes with messages of hope and endeavour. On penultimate track ‘Crazy Leap of Faith’, Ali and Micky say:“This song is about taking a chance and leaping in out of your depth. There is freedom to be had out there. Sometimes it’s scary but it’s got to be done. And we sing this one together, because it’s kind of about us…“
Whilst on the final track of the album, these leaps are shown to be acts of responsibility to ourselves: Many of the great old blues songs carry a message about lessons learned in life and we wanted to pay homage to that tradition. It talks about owning your decisions and accepting responsibility for your own actions instead of laying the blame at someone else’s door. It ends with the title of the album ‘Who’s Directing Your Movie?‘ The implied answer is ‘ You are!’ Get out there and live.. but live well’.

EDITOR’S NOTES
About Ali Maas and Micky Moody
Ali Maas has always specialised in writing original material with thought-provoking lyrics and inventive melodies. After an initial period of studio work, and live session singing, she progressed onto the indie rock scene as lead singer and writer for the critically acclaimed band McQueen. During this time, Ali also developed her skills as an artist and currently runs her own one-woman enterprise, making mixed media artwork and leather work for the interior design industry. She currently presents a weekly show on TotalRock Radio called Black Cat Trails, dedicated to Blues, Rock and Beyond.Aside from his well-documented time with Whitesnake, guitarist Micky Moody was also a member of Juicy Lucy, Snafu, Frankie Miller’s Full House, Roger Chapman and the Shortlist, The Moody Marsden Band, The Company of Snakes, M3 and Snakecharmer. He has also been a very active session musician, author and creator of library music.

Tracklisting A Side1. These Times2. Get A Mind (And Change It)3. Destination Heartache4. All The Bastards In The World5. A Sunset And A DramB Side1. The Walk Of Shame2. Where Does It Leave Me3. Emotional Powder Keg Blues4. Crazy Leap Of Faith5. What Place Has Blame?